Relipoietin (Erythropoietin) is a glycoprotein hormone that controls erythropoiesis or red blood cell production. It is a cytokine for erythrocyte (red blood cell) precursors in the bone marrow.

Also called hematopoietin or hemopoietin, it is produced by the peritubular capillary endothelial cells in the kidney, and is the hormone that regulates red blood cell production. It also has other known biological functions. For example, Erythropoietin plays an important role in the brain’s response to neuronal injury. Erythropoietin is also involved in the wound-healing process.

When Erythropoietin is used as a performance-enhancing drug, it is classified as an erythropoiesis-stimulating agent (ESA). Erythropoietin can often be detected in blood, due to slight differences from the endogenous protein, for example in features of posttranslational modification.

Relipoietin is used for the treatment of anemia (low hemoglobin or abnormally reduced number of red blood cells) related to severe kidney disease, cancer chemotherapy for certain tumors, or due to zidovudine treatment for HIV (Human immunodeficiency virus) infection. Relipoietin is also used in moderately anemic patients scheduled to have major bone surgery (hip or knee replacement surgery) to reduce the need for blood transfusion. 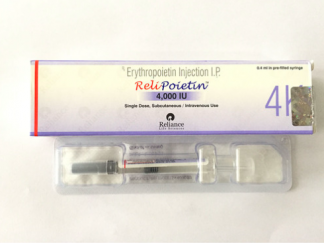